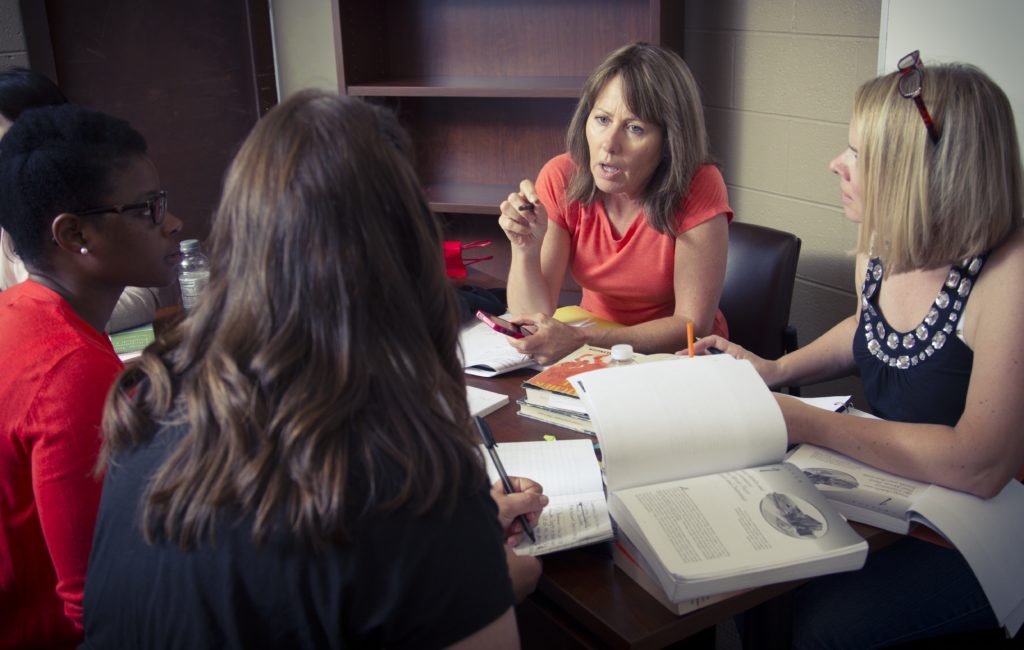 “Literary Undergraduate Research in English” (LURe), a journal of literary research edited and published by undergraduate English majors at the University of West Georgia, will benefit from $25,000 from the National Endowment for the Humanities (NEH) and $25,000 raised from generous donors.

Dr. Leah Haught, assistant professor of English and faculty advisor for LURe, was awarded the NEH Challenge Grant in January when it was announced that NEH would match every dollar raised, up to $25,000, for each of the next two consecutive years.

“Having the opportunity to match a prestigious National Endowment for the Humanities grant places the Department of English and the College of Arts and Humanities on a new level of grant achievement,” said Dr. Pauline Gagnon, dean of the College of Arts and Humanities. “The structure of this grant reveals the great faith NEH has on our LURe project, as well as on the ability for our college to reach out successfully to our supporters for the ‘magic match’ that doubles their gift for this important project.”

“When I became aware of this particular grant, I noted the NEH wanted to support a program that was already in existence and help that program grow,” said Haught, assistant professor of English and faculty adviser for LURe.

LURe was created eight years ago to showcase critical writing skills by UWG English majors and to launch a peer-reviewed national journal for undergraduate scholarship. Since then, the journal’s submissions have grown substantially, expanding from only UWG students to those from the University System of Georgia and even nationwide.

“When I first conceived of starting an undergraduate journal, I had no idea how we would be able to sustain the journal with a shoestring budget of $500,” said English Professor Dr. Lisa Crafton, who founded LURe in 2010. “With lots of commitment and hard work from volunteer student editors, we built the reputation of the journal and transformed it from its inception as a publishing opportunity for UWG students to its national, peer-reviewed status.”

All work done by students with LURe is extracurricular. Funding, in part, will compensate an editorial board of three students so they no longer have to balance their education, a part-time job and the journal.

The additional monetary support will expand the conference associated with the publication. Held in the fall semester each year, the meeting is currently limited to current English and philosophy students.

Additionally, the funds will help grow the English program’s new editing and publishing certificate and lead to internship possibilities both within and outside the LURe editorial staff.

Crafton and Gagnon noted none of this would’ve been possible without the contributions of UWG supporters.

Alumnus Lance Toland has stayed active with the university throughout the years, most recently having given a lecture on his documentary, “The Golden Isles at War,” which tells the story of Georgia’s Golden Isles immediately before, during and after World War II.

And as a businessman — he owns Lance Toland Associates, a recognized leader in aviation insurance management with a worldwide client base — he knows what it takes to be successful. With his donation, he hopes LURe helps pave that road for students.

“Eighty percent of business today is communications through writing and expression,” Toland said. “I like to engage in small specific programs that will hopefully bolster students’ ability to enter the workplace with greater confidence.”

English alum Bruce Hildebrand ’73 agreed that preparation is key and wants to have an impact on UWG’s future and the futures of its students.

His passion for giving comes from his limited financial resources as a college student and his belief that a college degree — coupled with dedicated, hard work — are essential to becoming successful. One of his most recent gifts was a scholarship supporting gap funding at UWG in memory of his late wife, Sarah McCray Hildebrand.

“West Georgia invested in me and provided me with enduring educational and life skills,” he shared. “LURe is designed to do the same. It will enable students to focus on honing their writing and editing skills while using the latest technologies. Plus, there will be funds to employ student staff, provide internships and pay for conferences. Ultimately, the LURe program will lead to students being better prepared for good jobs when they graduate.”

Retired faculty member Dr. Martha Saunders, who taught at UWG for 30 years, remembers a time when English internships were nonexistent. With her contribution, she said she hopes students take advantage of what LURe has to offer.

“With all the emphasis on science and technology, I’m glad to see something working in the humanities,” she said. “I’m hoping this will give students some background in various specific fields in the humanities.”

CUTLINE: “Literary Undergraduate Research in English” (LURe), a journal of literary research edited and published by undergraduate English majors at the University of West Georgia, will benefit from $25,000 from the National Endowment for the Humanities (NEH) and $25,000 raised from generous donors. Dr. Leah Haught, assistant professor of English and faculty advisor for LURe, was awarded the NEH Challenge Grant in January when it was announced that NEH would match every dollar raised, up to $25,000, for each of the next two consecutive years.

Exhibits, Expo, and Activities Celebrate the Art of Quilting in Carrollton

Our Mission is simple, We strive to be the pulse of each community that embraces small business.
Contact us: [email protected]

Popeyes Under Construction in Villa Rica