16mar7:00 pm11:00 pmThe Steed BrothersLive In The Backroom at Sutton's 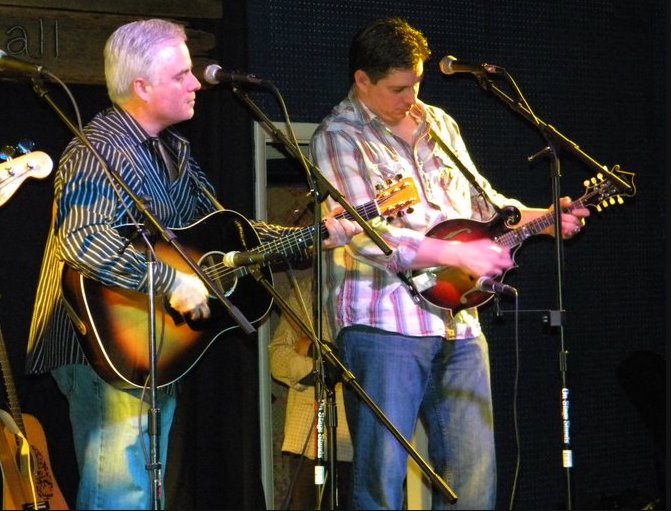 $5.00 cover https://www.facebook.com/TheSteedBrothers/ Bowdon, GA natives and brothers, Zach and David Steed share the bluegrass legacy handed down from their father, Mike Steed, who raised his sons in an environment

Bowdon, GA natives and brothers, Zach and David Steed share the bluegrass legacy handed down from their father, Mike Steed, who raised his sons in an environment filled with encouragement, discipline, and guitars propped in every corner. The elder Steed began is 41 year stint in the regionally accomplished and long distinguished bluegrass band, Bullsboro, in 1973. Bullsboro is among the oldest and…perhaps the longest continuously playing bluegrass band in the state of Georgia. The band was inducted into the Atlanta Country Music Hall of Honor in 2011.

The Steed Brothers, Zach and David, literally grew up with Bullsboro. Zach began playing in the band off and on as a teenager in the early 80’s and became a full-time member in 1994. He was inducted into the Atlanta Country Music Hall of Honor in 2009. While David’s guitar playing interests migrated more toward the blues sounds of the Mississippi Delta, Texas, and Chicago, and unexpected need arose for a mandolin player in the band. Zach told his younger brother that if he wanted to join the band, he’d need to learn to play the mandolin in 6 weeks. David accepted the challenge and joined as the band’s mandolin player in 1997.

Through the years, Zach and David each began expanding their interests and musical pursuits beyond the band they grew up with. Playing alongside other accomplished artists and exploring different musical genres gave rise to the group casually referred to as “The Steed Brothers.” Zach says the name really began as an efficient way to identify their participation on bills where many artists and groups were also involved. Since then, the name has stuck as people have begun to recognize their unique brother harmonies and musical style.

The brothers have been involved with several recorded projects, live performances on Zac Brown’s “Sailing Southern Ground” cruise, the “midnight jam” at MerleFest, as well countless private engagements and bluegrass festival appearances with Bullsboro where they’ve been billed with touring acts such as Ralph Stanley, The Lonesome River Band, Rhonda Vincent, Larry Cordle, Doyle Lawson, Jim and Jesse, The Lewis Family, and many others.

Zach anchors the band with his smoothly unique rhythmic style of guitar playing while David is featured primarily with his original mandolin style along with some passionate guitar work thrown in from time to time. Each brother contributes vocally – sometimes seamlessly swapping vocal parts during the performance of a song.

Joining the brothers on bass and vocals is one of the finest musicians anywhere, Ms. Jane Baxter. Jane, Zach and David have literally known each other since childhood and each is gratified to have the opportunity to make music together. Jane is a master musician and vocalist and 2011 Inductee into the Atlanta Country Hall of Honor. She serves as the resident expert and vocal coach for the group. Jane has toured the country playing with the infamous Gary Waldrep Band as well as country duo, Joey & Rory.

On banjo is the inimitable James McKinney. James is a world class banjo player who is perhaps unsurpassed in his knowledge of the banjo neck as well as his innovative and electrifying execution and delivery. To say James is highly accomplished would be a gross understatement. James has earned banjo championships throughout the United States. He has toured the nation and with industry legends such as the late Vassar Clements as well as appearing with Dickey Betts, the Grateful Dead, Jerry Garcia and many, many others.

The Steed Brothers invite you to lean in and enjoy their home-cooked style of grass…energized.