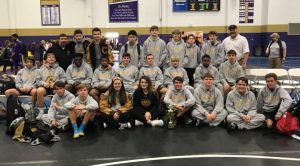 Head Coach Michael Cleek said he is proud of his team’s overall performance at the tournament. The Trojans lost a hard-fought 43-29 matchup to Veterans High School in the consolation quarterfinals.

“We had a lot of our seniors that really stepped up and led the way for us,” said Cleek.

Carrollton defeated Ware County in the first round of competition by a score of 37-30. The Trojans then suffered a 62-18 loss to Buford, who would go on to be crowned state champions in Class AAAAA.

Carrollton moved on to the consolation bracket and defeated Decatur by a blowout score of 72-12 before falling to Veterans in the following round.

“Grant won all four of his matches with a pin, and Jake really did well too,” said Cleek. “As for our younger guys, Chase Sippola did a fantastic job, and Brent Parivechio wrestled really well. They both won all four of their matches. I’m proud of all our guys from top to bottom.”

Cleek said his squad will now be more familiar with the state’s top wrestlers, and they hope the opportunity to compete in the state duals will pay off during the traditional state competition coming up next month.

“We definitely got to see what the top kids in the state look like,” said Cleek. “We have to make sure that we are drilling hard and correct any deficiencies. This past weekend gave us a picture of what we can expect to see next month.”

Central’s Wrestling team also made the trip to Macon, but fell into stiff competition during the tournament. The Lions lost to third-place finisher West Laurens in the opening round by a score of 52-25.

Central had a commanding 62-17 win over Cross Creek in their first consolation match, but lost in the following round to Woodward Academy 43-33.

“We had very high goals, and we came up short, but I think we wrestled hard,” said Fountain. “We were two or three matches away from really being able to compete with some of those top teams. I’m really proud of how our guys did.”

Fountain said his team looks forward to local competition this weekend at the Bowdon Invitational tournament.

“We will look to compete at the Bowdon Invitational, and we’re also looking forward to our Senior Night coming up on Wednesday against Mt. Zion and Villa Rica,” said Fountain. “That’s some of the last competition we will see before area.”

“We are definitely excited about our upcoming competition,” said Fountain. “We have had a lot of injuries, so we are having to do more with less, but our kids are stepping up to the challenge.”