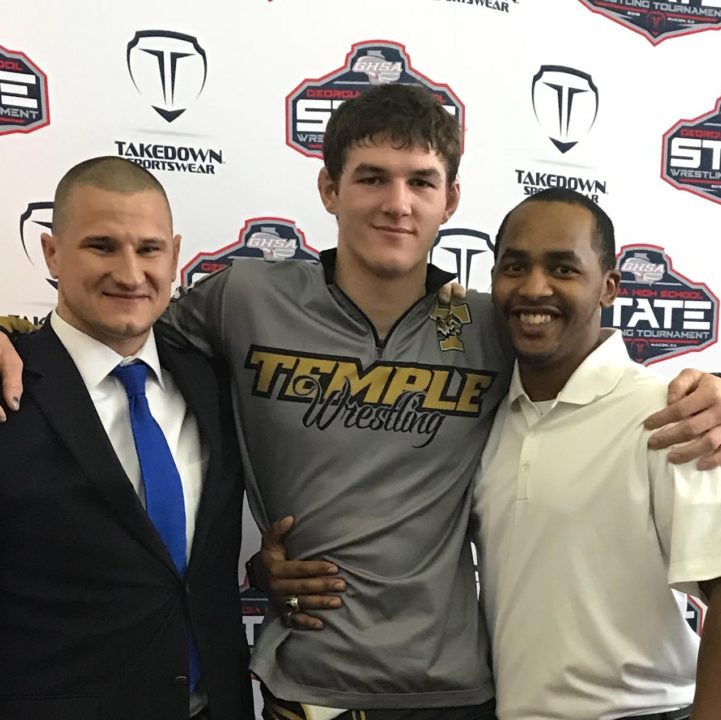 Two Temple wrestlers made some noise at the Georgia High School Association State Wrestling Championships in Macon this past weekend. John Austin Robinson won the Class AA state championship in the 170-pound weight class. Temple’s Preston Hulsey also took a place on the podium after finishing 4th in the 145-pound weight class.

“We had been expecting him to do very well this year—he only lost the championship match last year by one point,” said Head Coach Caleb Hannah. “He works very hard and is 100 percent dedicated to the sport. I can’t say enough about how proud I am of him and Preston.”

“Winning state was really an overwhelming feeling,” said Robinson. “Everything that I had worked so hard for had finally paid off.”

Hannah noted that Hulsey had been battling a knee injury for much of the season and was forced to forfeit his final match in an effort to avoid further injury.

“It was a tough decision, but he was already in a lot of pain so we didn’t want to risk him getting injured worse,” said Hannah.

Robinson finished his senior season with an incredible 32-1 overall record with 29 pins. His career record stands at 103-14 with 89 pins.

“What he was able to accomplish was really remarkable, especially considering he didn’t even wrestle his freshman year due to a elbow injury,” said Hannah. “His only loss of the year came by an injury forfeit, and there were only two kids he didn’t pin.”

Robinson says he has plans to wrestle at the collegiate level next year at Huntingdon College in Montgomery, Alabama.